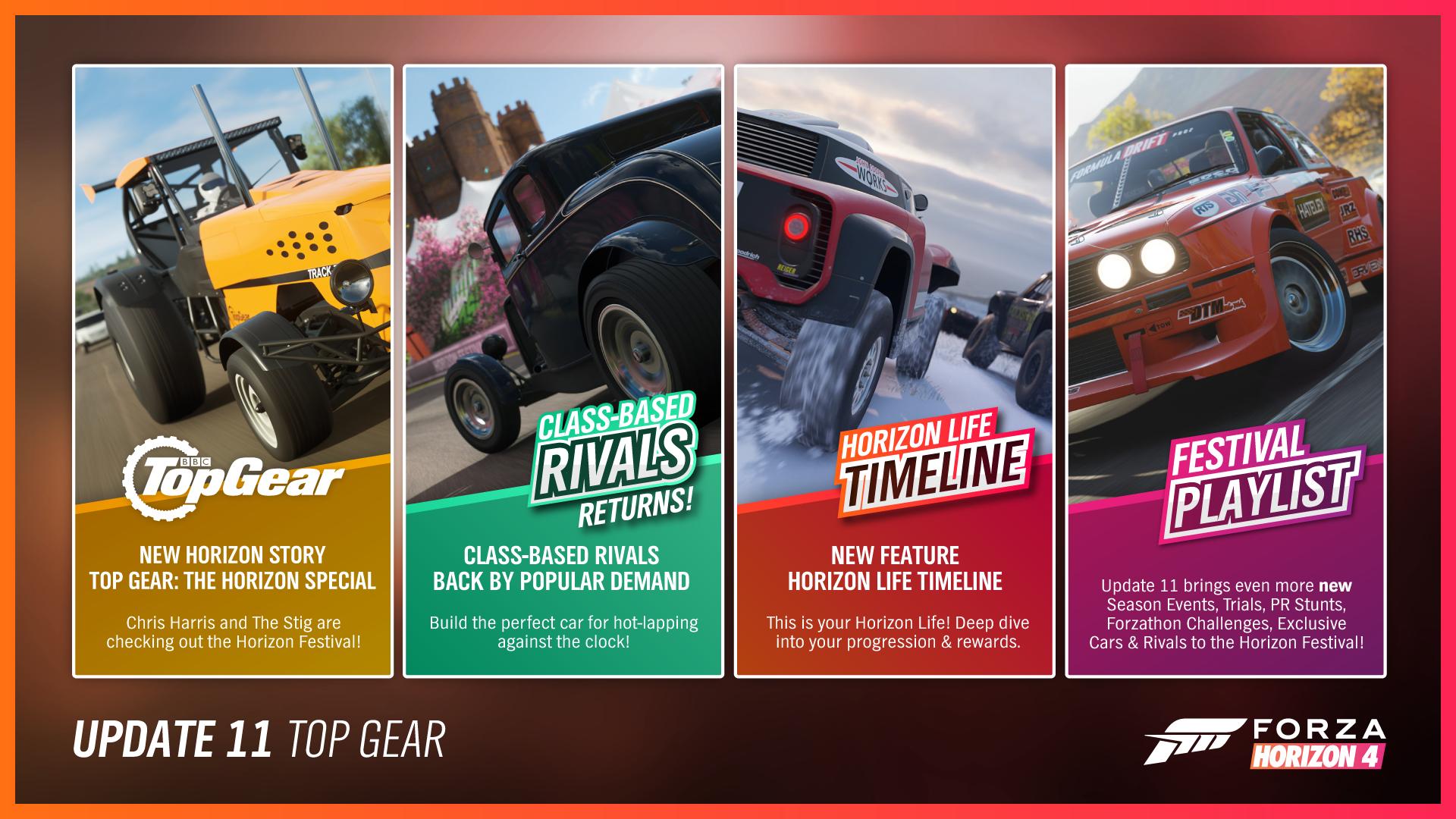 The Horizon Festival is in the UK this year, and Top Gear presenter Chris Harris and The Stig are there to see what it’s all about. This update adds a new Horizon Story, with 7 chapters of gameplay featuring entirely new gameplay, narrated by Chris Harris. Completing the Top Gear Horizon Special will unlock the “I am The Stig” T-shirt , The Stig Race Suit, the Top Gear Project E-AT, the Top Gear Track-Tor and the Mercedes Benz G63 6×6 Sports Utility Truck.

The maximum possible Auction House prices for many cars will now fluctuate based on sales, up to a maximum of 20.000.000 CR. The system will monitor which cars sell quickly, and allow their maximum price to rise over time. The maximum price for cars that do not sell quickly will fall over time, to find an equilibrium. Legendary Painters will not be affected by this system, and will be able to set prices as before. We will monitor the impact of this feature on car prices and continue to respond to it.

Back by popular demand, we’ve added Class-Based Rivals to Forza Horizon 4! Now you can build the perfect hot-lapping machine for each Class and each Route, and dominate those leaderboards. These new Class-Based Rivals Events have been added alongside our existing curated Events.

Being a superstar deserves super rewards, so we’ve amped up each of the Star Cards with an extra reward:

Only the base game content is required to complete the Star Card challenges and earn these rewards.

Added High Contrast UI Mode, available from within Video Settings.  Ensures that text elements have a minimum level of contrast with their backgrounds to aid readability for visually impaired users.

Added Screen Reader functionality to improve UI navigation for visually impaired users.  This feature can be enabled using the ‘Let Games Read To Me’ option in the Xbox ‘Ease of Use’ system settings.

Fixed an issue where the player was always starting at the LEGO Valley house, despite selecting a home on the Mainland

Improved the logic behind what does, and what does not trigger wall riding penalties

Fixed an issue with audio distortion on the Koenigsegg Agera RS

Fixed an issue with sorting on Grandmaster Leaderboards for Online Adventure

Fixed an issue which would cause other cars to disappear, and remain missing, if the player entered and then quit an event whilst enrolled in a #FORZATHON Live event

Fixed an issue where seasonal Speed and Drift Zones were not displaying their full route on the map, or mini-map